‘Whoops’ and the learning that can occur…

I have been very fortunate to be part of the group who helped with the development and the implementation of the Henderson Libraries Generation STEAM workshop series. The first workshop was given in January 2015 and they continue through June. These workshops have proven to be quite popular and most are full with long waiting lists. There is obviously a need for more exploratory hands-on experiences for valley youth.

Yesterday was our “Physics Through Rocketry” workshop which was run by Caleb Schmucker. Paper rockets and an air compressor were used to allow kids the opportunity to run through several iterations in order to create a rocket that would fly across the library. The joy the children experienced while conducting this type of exploration was evident in their smiles as they raced to get the paper rocket they had successfully launched.

Not all of the landings were successful. The set of windows that made up one of the walls of the library space offered a lot of obstacles for flying paper rockets. There were lights to crash into, beams to get stuck in, and window framing to land on. 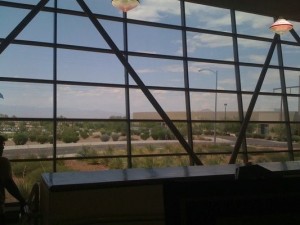 As the workshop progressed, I noticed one young man with a very long paper rocket that had no fins and had a decided bend in the upper section of the body. My first thought was, “that is not going to go very far”. Then I realized he had designed a retrieval device for the paper rockets that had landed on the framing.

Many adjustments were made to this device as he had to reach higher and higher for other rockets. Index cards were used to reinforce weaker components, and other children offered advice as to the placement and operation of the device. There were successful retrievals of rockets on lower frames, but the rocket in the above picture was stubborn and the supports were not strong enough for the height and weight of the contraption. I watched as he went back to the materials table several times, never willing to admit defeat. Finally, he turned to his cohorts and stated that “this is not going to work, we have to design something else!” The last I saw of him was when he elicited his mother’s aid in Googling how he could design a better retrieval device. The workshop ended shortly after so unfortunately he was unable to complete his objective.

This experience encapsulated the importance that exploration and the ‘whoops’ factor bring to student learning. This was an informal learning space, but it could translate to the classroom. Rather than providing students with a recipe-style lab on rockets, the teacher could present them with the same materials as this workshop and the ‘Big Question’ of how many ways can you design a paper rocket in order to get it across the room? When the inevitable ‘whoops’ does happen, let the students formulate the next ‘Big Question’ and then find their own answers, authentic learning at its best!

I hold a doctorate in curriculum & instruction, with an emphasis in educational technology and science education. I work for the University of Nevada, Las Vegas as the Evaluation and Assessment Specialist for the Center for Research, Evaluation, and Assessment. My current research interests include qualitative responses to course evaluations, both the development of open-ended items and their subsequent analysis.
View all posts by Cynthia Clark →
This entry was posted in Uncategorized. Bookmark the permalink.

Veteran writer, Steve Body, on beer, wine, spirits, the Business Of, and those who make them...

Just like the Thesis Whisperer - but with more money

Czeching in on learning technology

a lab a dog could love (or the other way around)

Education as it should be - passion-based.

Finding that sweet spot between technophile and technophobe